Really, is there any holiday more fitting for a Batman story? The night instantly justifies masks and gimmickry galore, to say nothing of all the potential to further Batman’s creature-of-the-night image, all the angsty childhood flashbacks he’s sure to get at the mere mention of trick-or-treating, how one of his A-list enemies is literally built around terrifying people…

Or he could just get in a punch-up with a big white zombie. There’s precedent for that, too. 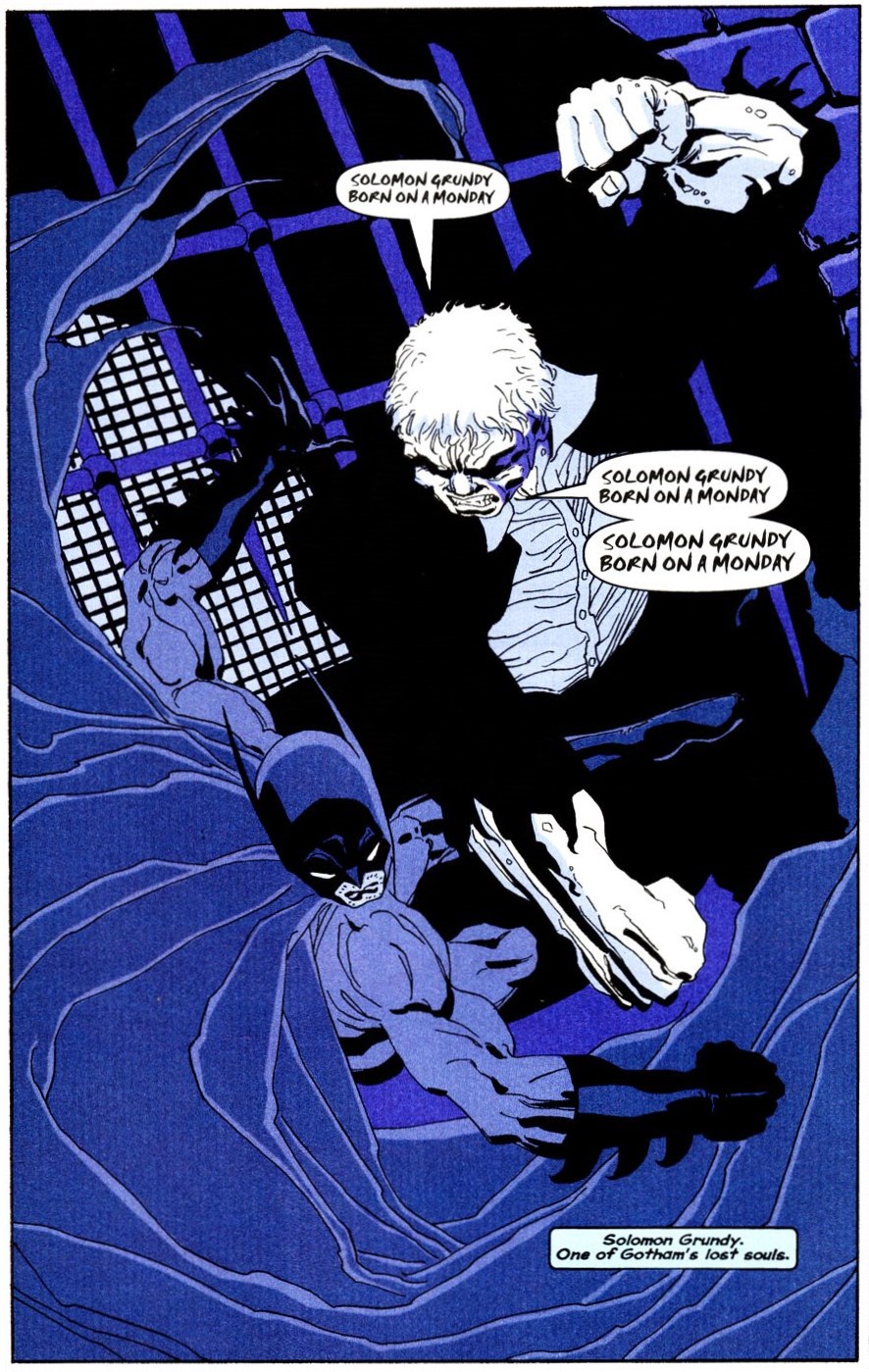 Like Ragdoll, Solomon Grundy was originally a foe for a relatively obscure Golden Age hero – in his case, the Green Lantern Alan Scott. But unlike ol’ Ragsy, Grundy was never truly forgotten by fandom or creators: after his debut, he lumbered around various supervillain teams (one of which eventually catapulted him to minor Internet stardom), fought just about every hero in the DCU at least once, got to be a hero at a few intervals, and eventually ingrained himself in Batman’s rogues gallery deep enough to snag a boss fight in Arkham City.

Grundy’s deal in the comics is pretty convoluted (especially when you factor in the whole “reborn with a different personality each time” thing), and those of you truly curious can find a good, geeky analysis here. For our purposes, it boils down to this: 19th century robber baron turned into a zombie, (usually) your standard-issue dumb muscle, except since he’s not really “alive”, even DC’s most squeaky-clean heroes tend to give zero fucks about killing him. In fact, the first time he fought Batman, this happened.

Let’s see if the big guy will fare any better here, shall we?

END_OF_DOCUMENT_TOKEN_TO_BE_REPLACED

And here we arrive at Season 2’s first undisputed masterpiece, which unfortunately has to stand in the shadow of a certain other Batman episode with the exact same title, not to mention similar themes. But honest to God, I think today’s episode may actually be a contender, if not outright superior, thanks to that fellow whose name comes after the Writer tag up there.

Greg Weisman is back, people, and he’s here to kick ass, take names, and sweep the Emmys. Tell us, Sir – what is your secret?

Oh, Greg. You and your wacko radical theories. Good thing you’re handling the one villain this show allows a modicum of maturity and nuance, else we’d have to put you in the funbox!

Anyways, this is the first time The Batman‘s taken a stab at a villain reformation episode – something That Other Show absolutely loved, especially during its The Adventures of Batman & Robin season. How will the more simplistic, black-and-white world of The Batman handle the same theme? Let’s find out.

END_OF_DOCUMENT_TOKEN_TO_BE_REPLACED

Y’know, getting hijacked by the Joker is probably a rite of passage for Gotham’s networks.

Good ol’ Mistah J forcing himself onto Gotham’s airwaves is, again, something that literally goes back to his first appearance, and they’ve never really given it a rest since. He’s done it on the Adam West show, he’s done it in both the Burton and Nolan movies, and he’s done it too many times to count in That Other Show and its offspring, all culminating in what’s probably my favorite episode of Justice League.

It makes a lot of sense – the Joker’s a real egotistical bastard, after all, and his whole gimmick works best with an audience – but after seventy-five years of this gag, finding a fresh angle can get really hard. There have been a couple attempts to use it as satiric commentary on the entertainment biz, but those were… underwhelming, to say the least. And in any case, I fear such things are still beyond this show’s scope.

Hell, even this episode’s name isn’t original, owing itself wholly to a story from That Other Show’s tie-in comic.*

But ah, enough with the doom and gloom and things that go boom. If nothing else, we’ve got two very special guest stars to look forward to, so here we goooooo!

END_OF_DOCUMENT_TOKEN_TO_BE_REPLACED

And now, I suppose, it’s time to talk about these guys.

Despite my fondness for (most of) Batman’s rogues gallery and my obsession with nitpicky little details, the name Clayface has always left me kinda cold. Part of it probably has to do with how I usually don’t like Batman’s villains to be genuinely superpowered, but mostly it’s because the character gives off the feel of that one “meh” movie that just kept on pumping out sequels even when no one was asking for any.

I mean, shit – even I couldn’t bring myself to care any more after the fifth one popped up, and if my ten-second glance at the Wikipedia page is right, twice that many people have now worn the name. If you’re really curious, here’s a quick overview of the first five.*

Mind you, none of the above is really essential to understanding this Clayface, since most people (including, I reckon, The Batman‘s showrunners) are chiefly familiar with the version from That Other Show. That fellow boasted a dramatic two-part origin featuring some of the most gorgeous animation in the history of Batman, though I don’t really know anyone who considers him That Other Show’s most interesting villain. Or even its most interesting villain whose name ends in “-face”.

Still, he was almost certainly the most interesting take on Clayface circa 1992. Now, however, we’re in the wonderful world of 2005 – and I figure it’s time that the younger, upstart challenger got a second look…