So here we are – The Batman‘s second attempt at a reformation story, and its last Ventriloquist episode. Much as I love him/them, I have to admit that’s probably for the best, since there’s really only two stories you can do with the Ventriloquist: the debut (which may or may not double as an origin) and the rehabilitation attempt.

This is an accusation more commonly leveled at Two-Face, and while I disagree in that case, I can’t deny that Arnold Wesker is in many ways a poor man’s Harvey Dent. Like Harvey, he’s a fundamentally good man plagued by an evil split-personality, but there’s no rise-and-fall arc, and far less complexity. Arnold and Scarface have nothing in common – to the point of using different names and different bodies – so their story is less “man confronts his darker side, compromises with it through random chance” and more “man gets pushed around by douchebag he just happens to share a brain with”.

And that’s when Scarface isn’t being portrayed as a literal demon possessing poor Arnold.

Long story short, Ventriloquist reform stories tend to go through the same beats no matter who writes them – you read one, you’ve read ’em all. That Other Show’s take stands out with a somewhat unconventional ending, but that’s about it. Let’s see whether The Batman can rise to the occasion.

END_OF_DOCUMENT_TOKEN_TO_BE_REPLACED

* A Crisis of Infinite Mousetraps tie-in

So I see that my masterful gambit for some advertisement for Dublin’s greatest polymorphic web comedian has panned out after all. Excellent.

With so many Bat-fans’ eyes ‘pon this blog, let’s talk about the second-most famous split personality case in all of Arkham Asylum. You know the one…

… well, I can probably look forward to a “bisected by giant penny” on my headstone, but it’ll all be worth it once we talk about one of my favorite Batman villains: this guy. Wait, where are you going? Don’t leave me here!

So, yeah. I love the one-man duo that is the Ventriloquist, and it confuses and saddens me to no end that he’s found on so many “Worst Batman villains ever” lists. For me, he’s always been an ideal mix of the silly, the serious, the sympathetic, and the just plain bizarre that make him a perfect fit for Batman’s rogues gallery.

A quick biography: Arnold Wesker is a perfectly mild-mannered senior citizen, who just happens to have a violent and greedy alternate personality called Scarface. Scarface prefers to express himself through a wooden ventriloquist’s dummy dressed like something out of a Cagney picture, see, and he’s got big plans to take over all the rackets in Gotham, see. Anyone who gets in his way can go take a swim in concrete shorts, see?

(Prison talent shows, albatrosses, and an old gallows tree all figure in there somewhere, but I don’t feel like doing Wikipedia’s job for it today.)

Despite being created by two Brits in 1988, the Ventriloquist feels like a villain who could’ve been created in the Golden Age, right alongside Joker, Penguin, and the rest. Vaudeville acts and gangster pictures were all the rage back in the 1940s, after all, and it would’ve been entirely believable that someone would combine the two. I used to agree with that, but the more I’ve thought about it, the more I’ve come to feel there’s something quintessentially British about this character.

I have neither the time nor the resources to go in-depth on what British comics were like back when America still had to contend with the puritanical Comics Code Authority, but suffice it to say they were not for the faint of heart. Sex, drugs, and blood were the order of the day, with the most iconic of the bunch being 2000AD‘s Judge Dredd, a strip hinging on the premise that ultra-violent totalitarianism was humanity’s only hope for survival.

The Ventriloquist was created by perhaps the most iconic writing team to ever work on Dredd: John Wagner and Alan Grant. Grant, in particular, is one of the most-overlooked members of the (other) British Invasion; in-between owning velociraptors and bonding with children, he held down a tenure on the Batman books that could easily rival Chuck Dixon’s. Over more than a decade, he fleshed out Arkham Asylum’s mythology and created dozens, maybe hundreds of Gotham’s B- and C-listers. You may have heard of one or two from all them newfangled vidya games.

When Grant and Wagner hopped over to DC, their very first story featured the Ventriloquist ordering a henchman killed and using the corpse to smuggle twenty kilos of hard drugs across the border. Directly followed up by this: 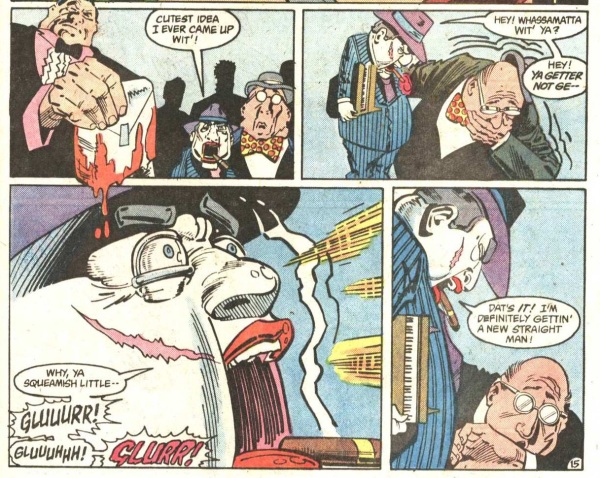 That, to me, is the defining thing about 2000AD and its ilk. No matter how many corpses they crammed the pages with, they never lost their sense of humor, and even Dredd himself was meant to be an object of both admiration and ridicule instead of a straight role-model (most of the people who worked on his comic trend libertarian in real life).

And so, much like the Joker, Wesker and Scarface can easily be played for humor or horror (or both, sometimes inside the span of a single page). Except unlike the Joker, there’s a powerful streak of pathos underlying it all. Arnold Wesker isn’t a bad man – at least, not the kind of bad man who wants to live on an empire of drugs and murder – but he’s far too much of a wimp to resist Scarface’s bullying, domineering personality. The little puppet physically and verbally abuses him 24/7, and all he can do is stand there and take it. And since this is Gotham, therapy (almost) never lasts.

Cartoons inevitably tone a lot of this down, but I can’t get too hung-up about that. Nothing about his gimmick says he has to commit ultra-dark crimes, and if the DID stuff also gets axed for The Sake of the Children, well… at least I’ve got the aesthetics to look forward to.