Contrary to popular belief, having multiple writers on an episode does not mean it’s less likely to be terrible. Case in point: almost every new episode of Spongebob Squarepants has three writers attached.

And my word, are Pugsley and Klein facing an uphill battle today. You see, this is a Man-Bat episode, and those of you who paid attention to my first review…

… will likely recall that I don’t care much for Man-Bat. And I still don’t.

Seriously, he makes Bane look like the gold standard of innovation and interesting plot development. In case any of you are unfamiliar with him, here’s a thumbnail biography from Wikipedia:

Dr. Kirk Langstrom, a scientist specializing in the study of bats (chiropterology), develops an extract intended to give humans a bat’s sonar sense and tests the formula on himself because he is becoming deaf. The extract works, but it has a horrible side effect: it transforms him into a hideous man-sized bat. The serum also takes away his intelligence, so he goes on a mad rampage until Batman can find a way to reverse the effects.

Even if you don’t particularly give a crap about Marvel (and to be honest, I don’t), Man-Bat is a pretty lackluster villain, mostly because Kirk Langstrom’s consciousness goes lights-out whenever he turns into the guy (which is almost always by horrible circumstance instead of intent). There’s very little emotional or moral stakes to be had – he’s a villain 100% built for action sequences, and incredibly predictable action sequences at that. I’ve seen Batman hitching a sky-ride on his claw about several dozen times now, and it was pretty boring after the first one.

But that was apparently good enough for him to carve out a niche, and he’s been a semi-recurring member of Batman’s rogues gallery ever since. As previously mentioned, That Other Show used him as their first villain, and the episode in question was almost entirely redeemed by how badass Spectrum’s animation was. That might be written off as a chest-beating display of creative independence on their part (please realize that I spontaneously sprouted a beret, goatee, and Starbucks latte as I typed that), but then they did another one.

At this point, it’s probably for the best if we all admit to what his real appeal is:

Oh, there’s been a few snippets of more interesting takes – mostly when they tried to play him as a hero who’s in full control of himself as Man-Bat – but those never last long. Let’s see if The Batman can make this bat fly, shall we?

END_OF_DOCUMENT_TOKEN_TO_BE_REPLACED

Fandom’s a fickle thing, innit? One minute you’re the undisputed number-two of Batman’s rogues gallery, with page and screen alike portraying you as a cunning, ruthless, yet classy threat who can stand alongside the Joker himself without looking out of place. The next, you’ve become an embarrassment to all things Batman, a symbol of silliness and camp best left forgotten, and fans start treating you like the other number two whenever your name comes up.

Generally, if a Batman fan has anything besides sneering contempt or crushing apathy for the Penguin, it’s because of either his Arkham City or Gotham incarnations, neither of which I particularly care for. I don’t want to sound hipstery-

– but the whole idea of the Iceberg Lounge and the mob-boss gig is something I’ve become very ambivalent about. Even at the best of times, it makes the Penguin look like a bargain-bin Lex Luthor, someone who’s not good enough for real supervillainy and thus has to stick to a desk before Calendar Man sends him crying home to mommy (for related reasons, I have a knee-jerk reaction against people insisting that Penguin has to be the token “sane” rogue in Gotham). And more often than not, writers just portray him as a sleazy stool-pigeon to get beat up by Batman (or one of his sidekicks) or outsmarted by a newcomer. In short, Iceberg!Penguin is a colorless symbol of the status quo, and there’s nothing Gotham likes breaking more than a status quo. 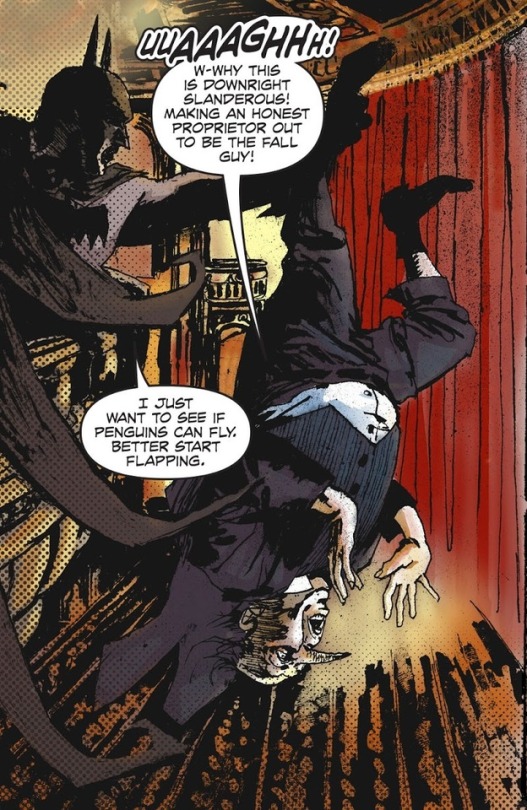 I mean, I don’t want to rag on whoever thought up the Iceberg Lounge, but…

I love most of his stuff, guys. I swear.

So, yeah. I like me some openly criminal (and loving it) Penguin, the kind of guy who whips out boxing-glove umbrellas at a second’s notice and thinks nothing of sending poison-beaked hummingbirds after Batman, all while hamhandedly romancing the star of his favorite soap with overpriced chocolates. At knifepoint.

And it seems that I’m in luck. The Batman‘s take on Penguin is renowed for being a black-hearted bumbershoot bandit through and through. Surely this is just what I’m looking for!

END_OF_DOCUMENT_TOKEN_TO_BE_REPLACED

Quick show of hands: how many of you know this guy?

No one? Wait, wait… you in the back, you… oh. You were just stretching. Sorry.

So. The gentleman up there is named Chuck Dixon, and he will be popping up a lot over the course of these reviews. Why? Because he is, bar none, my favorite Batman writer of all time. He’s not one of the big names like Frank Miller or Jeph Loeb or even Denny O’Neil, but his accomplishments and legacies (in the DC Universe and elsewhere) are many. A small and select list:

Oh, and he created the villain of today’s episode. Shame or something.

Okay – in all honesty, I’ve never liked Bane very much, even though he’s almost certainly Dixon’s most well-known creation and Dixon himself is immensely proud of the fellow. Yes, yes, heretic, Judas, how dare you dismiss the man who broke the Bat, etc., but there’s something disgustingly… safe about him.

A quick history lesson for those who need it: Bane served as the linchpin of the 1993 megacrossover Knightfall, breaking Batman’s back so DC could “experiment” with a new, more X-TREEM Batman. Anyways, Dixon spared no expense in establishing what a grade-A badass this guy was – raised in a hellhole Caribbean prison that severed all sense of morality from him, gifted with a sharp mind that allowed him to learn six different languages when most of the prisoners couldn’t even read, stronger than any mortal man could dream of when armed with the super-steroid Venom, and pretty damn strong even without the stuff.

But there’s no getting around the fact that he was grown in an editorial test-tube, so his character is more rooted in petty oneupsmanship than anything truly unique or engaging. Like the Joker? WELL THIS GUY’S TWICE AS RUTHLESS. Like the Riddler? WELL THIS GUY’S FIVE TIMES SMARTER. Like Killer Croc? WELL THIS GUY CAN MAKE MINCEMEAT OUT OF CROC WITH ONE HAND BEHIND HIS BACK. Like Ra’s al-Ghul? THIS GUY FIGURED OUT BATMAN’S SECRET IDENTITY  WITHOUT ANY FANCY INTERNATIONAL CRIMINAL SYNDICATE! As for his motivations…

Now, fellow reviewer the Unshaved Mouse has opined this sort of Generic Doomsday Villain can work in certain contexts, but I found Bane to be by far the dullest part of Knightfall. And I say this as someone who thinks that Knightfall – at least, the first third – was the best Batman megacrossover DC’s ever done, and probably the only one that managed to not waste the premise of every Arkham inmate running loose at the same time. Surely it’s not coincidence that most discussions of Bane, no matter how gushing, can’t help but mention that his post-Knightfall career mostly consists of acting like mindless muscle or jobbing to DC’s other heroes?

(Disclaimer: I’ve heard that Gail Simone’s done some amazing things with him in Secret Six, but as that’s not a Batman book, my point about Bane being a rather dull Batman villain still stands.)

Maybe Bane’s whole luchador getup is more fitting than I thought. Much like pro-wrestling, his much-touted victory over Batman was carefully staged from the start for maximum publicity, and he got to be king of the ring for all of five minutes before the higher-ups swept him out like yesterday’s garbage once they’d gotten bored of fucking around with the status quo…

Let’s see how The Batman handles this most estupendo of evildoers, courtesy of one Adam Beechen. Now, Beechen’s a very divisive name in the DC fandom – long story short, he ruined Cassandra “the best Batgirl (according to Tumblr)” Cain beyond repair, but he also wrote one of the most awesomely terrifying episodes of Teen Titans, so… can we at least call it squaresies?

END_OF_DOCUMENT_TOKEN_TO_BE_REPLACED

A short warning before we begin: I’m an extremely pompous geek who loves to show off how much he knows about Batman. So most every review is going to start with me blathering on about the entire history of that episode’s villain, plus any other stories that might’ve served as an inspiration for the episode.

Buuut not this one. It stars the Joker, and if you don’t know who that is, you should probably get back to Remedial Batmanology.

END_OF_DOCUMENT_TOKEN_TO_BE_REPLACED

The Batman did about average for a cartoon in its day and age – sixty-five episodes to close that sweet syndication deal, plus a better-than-expected DTV movie. Episode reviews (when they go up) may be accessed through this index or via the Prev/Next links in each review.

Season 1 (Or: Yes Father, I Shall Become A Bat)

Season 2 (Or: The Strange Secret of Greg Weisman)

Season 4 (Or: And Robin Shall Restore Amends)

Season 5 (Or: Isn’t that Brave and the Bold show ready yet?)

The Batman vs. Dracula